Chinese take-out restaurants tend to be minimally furnished, with oversized light boxes depicting far derivatives of traditional Chinese landscape paintings almost always featuring mountains and water. These illuminated displays advertise to potential customers an idea of what is Chinese while amplifying an outright facade of authenticity under a fluorescent glow of cultural placeless-ness. In successfully bridging the gap between the everyday and the ideal, even in this more washed out sense, the re-contextualization that occurs in the printing, production, and material structure of these more prevalent modern variants, relates to the seamless combination of content and action prized in traditional Chinese paintings.

Canvas and linen continue to conjure a sense of stability very much associated with the historicity of the medium of painting. The artist, interested in lightly circumventing the prevailing choice of surface so as to contend with far less control over the visible surfaces, has generously applied house paint as primer in multiple coats on thick fibrous burlap cloth. The priming is continued with a plaster-like mixture of powdered marble and acrylic medium until the crevices that make up the mesh surfaces are filled, providing the artist with a rigidified and overwhelmed ground on which to work. In Waterfall (Skógafoss Falls) and Waterfall (Mine St. Michel Falls), the corpuscular accretions visible on the surface, create pixelated nubs that extend outward in atypical sizes and shapes, a consequence of their drying and hardening along the warped dimensional plane of the burlap mesh cloth.

The unevenness of the misshapen, fragile painted surfaces, teeters between a pixelated analog screen from up close, to a gaudy image-laden beach towel or postcard image from afar. Less a trivialization of the medium of painting however, than a divestment in its seemingly intrinsic sense of durability and permanence, the double act implies different levels of finish and compositional integrity while simultaneously toying with stylistic variations. These overpainted and overwhelmed surfaces are also placed alongside paintings whose lack of finish resemble underdrawing and underpainting.

The overt stylistic variations within the five works on display are intended not so much to question modernism’s emphasis on originality, but as a way to hint at the new image regimes that have left painting and photography fundamentally transformed. As personal identities are increasingly defined through the photographic image, and as layered meanings are further hollowed out by the endless stream of imagery, reflecting the accompanying degradation and image loss that continues to pervade alongside all manner of screens, both analog and digital. 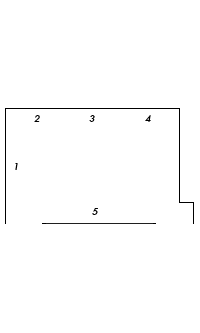