The three large paintings in the exhibition all share the same image as a common referent; a thumbnail wikipedia image of wisteria blossoms. The plant blooms with pale bluish-lilac flowers in the first weeks of Spring. The thumbnail image was downloaded, cropped and modified substantially — resulting in a simplified graphic form which was then printed on acetate, projected onto canvas and painted in an oil-based lettering enamel.

The modification of the initial encyclopedic image enables the reduced graphical quality of the thing-itself to potentially act more as a universalized vessel for the conveyance of an open-ended referent. The simplified form allows the referent within the image to be painted by the artist as if it were a word; so that in painting the pared down form, the artist engages in building the painting as an incomplete description — continuously incomplete, yet awaiting a viewing subject to build in the missing ideational remainder. 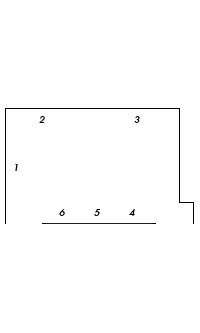