The individual sheets of construction paper that make up Wall Motif for MuseumofAmericabooks were placed against the window panes of the artist’s studio and intentionally exposed to the sun for several weeks. The artists attraction to the use of this modest and easily acquired material, aside from the strong associations that are conjured by it, lies in its ephemeral and non-archival character. The readily available standardized colored sheets, tend to respond differently to the sun, and offer the artist a method by which to achieve tonal variations quickly and simply. The undulating, rhythmical composition achieved by the attentive yet lightly applied wave-like forms, each equal in dimensions and cut from one shaped template, allude literally to to the ways that color and light travel. The composition reads both as a playful abstraction and as literal figuration.

The two recently completed paintings Casting Out Sevens 15 and Casting Out Sevens 16, derive from a series of the same name that was begun in 2013. The mathematical term is borrowed by the artist as a metaphorical stand-in that refers to the way that the corners of the seven-sided shaped paintings in this series, deflect attention directionally outward and serve to potentially highlight the surrounding wall space. The autonomous seven-sided shapes are a result arrived at through a concerted effort by the artist to have each form evade recognizability as being architecturally, symbolically, or iconically familiar in form. Alongside these strategies of deflection and de-familiarization, there exists a surface on which the artist has worked out problems specific to painting.

A small format artists book titled Trends in Repurposed Abstraction in a run of fifty copies has been published on the occasion of the exhibition. 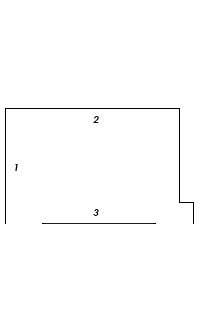