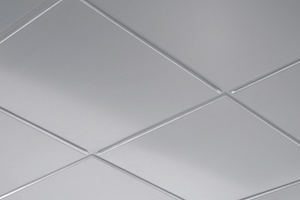 Drop ceilings are often used in renovation projects as efficient, economical ways to implement ceiling repairs that would otherwise be far more time consuming and labor intensive, and/or to reduce air conditioning and heating costs, and/or to conceal functional and structural components that may be undesirably visible along an existing ceiling surface.

In Armstrong suprafine topography/CS-B, the artist has retrofitted the entirety of the ceiling above the exhibition space with a nearly wall-to-wall sculpture consisting of a suspended grid ceiling system comprised entirely of galvanized steel panels individually fabricated to emulate the aesthetic functionality of their more prevalent commercial counterparts. Environmentally unsustainable, the galvanized steel is costlier, heavier than other more suitable materials, and does little to reduce energy use. By recreating instead of appropriating the referenced ceiling system, the artist contends with the structural and formal features of these engineered elements—achieving a finish and feel that alludes to the larger orchestrating structure of which they form a part, while working in a capacity that relies on, yet contradicts a particular commonplace non-experience often elicited by such environments.

Although used in both commercial and domestic settings, drop-ceilings— much like the high-density polyethylene (HDPE) tables and chairs that are found in both homes and offices today, are almost seemingly negligible. Their ubiquity in both settings contributes to their near invisibility while effectively modifying spatial perceptions in one respect, and in another— further obfuscating the discernible distinctions that may have held between the contrasting environments associated with work and with home.

In relation to contemporary working environments and working arrangements, it is artificial lights, artificial ceilings, and artificial tabletops that are somehow more ‘truthful’ of how it is that things today are actually made, and how it is that spaces are actually worked in. Alongside the contextually specific topographical mapping that occurs within the demarcated surface area of the exhibition space, is a sculptural imprinting of the space through the act of installing the fabricated ceiling tiles, one by one until the ceiling has filled the space. 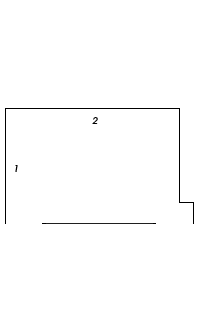